Michelangelo's David is unanimously recognized as a masterpiece of Renaissance art. Carved in less than three years between 1501 and 1504 by a young Michelangelo, not yet thirty, David immediately became a symbol of the city of Florence.

The colossal 9 arms tall (17.0 ft) marble block sculpted by Michelangelo had already been widely hewn by two other artists who worked on it before him. In 1464 Agostino di Duccio was commissioned by the Opera del Duomo (the cathedral's Office of Works) to sculpt a large statue for one of the buttresses of the apse of Santa Maria del Fiore. But the block of marble, badly hewn, remained unfinished. Ten years later, in 1476, Antonio Rossellino tried again to continue the work but in turn abandoned the difficult undertaking. Twenty-five years later, on September 13, 1501, Michelangelo began working on the David, which he completed in January 1504.

Michelangelo's David represents the biblical hero of the Old Testament. David's fight against Goliath is taken from the first book of Samuel. The young Israelite shepherd David demonstrated his courage by accepting to challenge the Philistine giant Goliath to a duel. He managed to defeat Goliath with a slingshot, hitting the giant in the center of his forehead. Then he used his enemy's sword to cut off his head. After bringing victory to his people, at Saul's death David became the second king of Israel.

Many artists before Michelangelo represented the future king of Israel. Among the most important Florentine examples, certainly known to Michelangelo, were Donatello's David and Andrea del Verrocchio's David, both kept at the Bargello Museum in Florence. According to the traditional iconography, the two bronze statues show us the 'victorious David', faithful to the biblical narration. A young David with sword in hand, the severed head of Goliath at his feet.

Michelangelo does not represent the victorious hero but the young man in the act of challenging his enemy before the fight. David's gaze is focused on his opponent's face, the body is vibrant and the muscles tense, in a pose of classical inspiration. The exceptionally detailed description of the muscles, veins and tendons testifies to Michelangelo's perfect knowledge of human anatomy.

The execution of David took place in a very particular period of Florentine history. Since 1494, after the expulsion of the Medici, the city was ruled by a republican government that had its seat in Palazzo Vecchio. Considered as a symbol of the republican liberty of Florence, Michelangelo's David was placed in 1504 in front of the Palazzo Vecchio, near the entrance. A colossal guardian defending the republican institutions against the tiranny of the Medici. In 1873, the David was transferred to the Accademia Gallery and later replaced by a marble copy still visible today in Piazza della Signoria, in front of the Palazzo Vecchio. 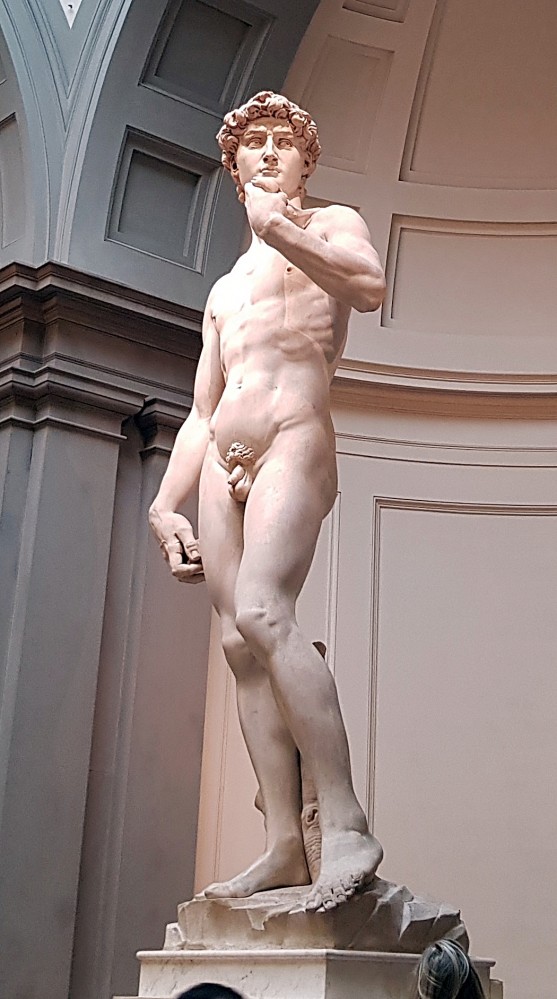 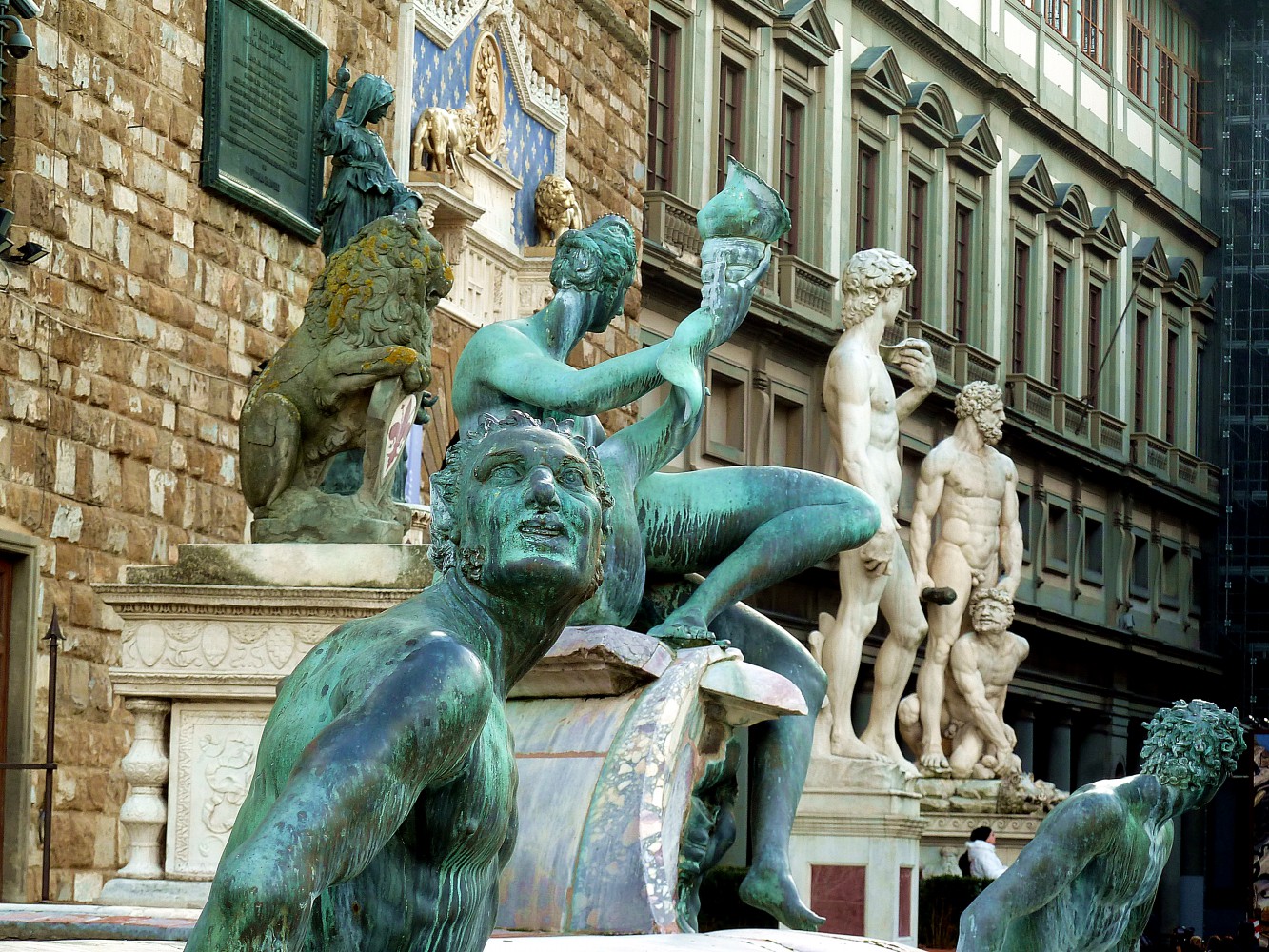 The walking guided tour of Florence historic center . is the most immediate way to get to know the artistic and architectural richness of the city. Florence Historic Center is entirely inscribed on UNESCO's World Heritage List, it retains a unique charm in the world, we'll find out by visiting the most famous places but also lesser known ones, rich in history and traditions. . Our Florence walking... 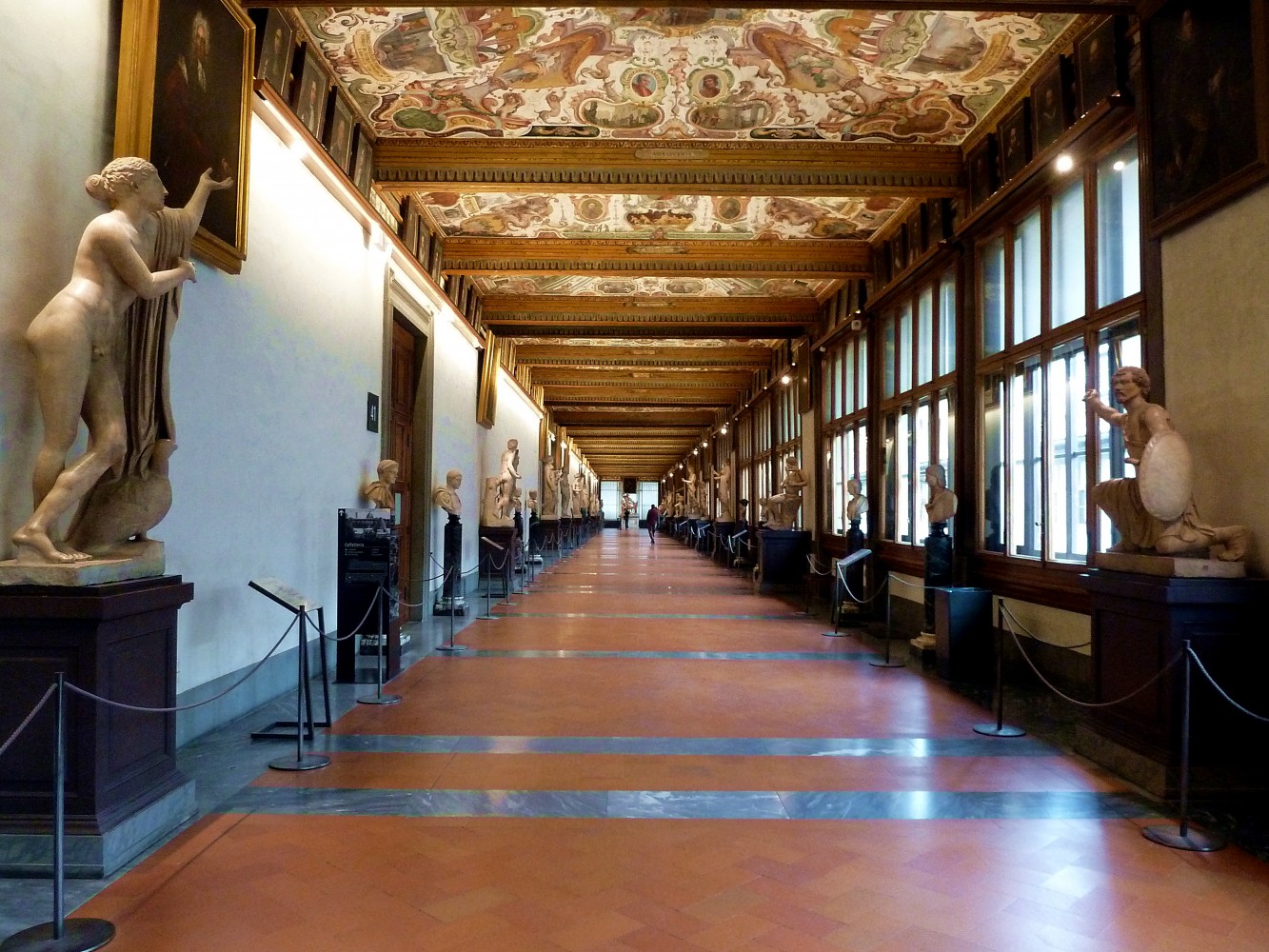 Uffizi Gallery Private Guided Tour . Designed by Giorgio Vasari for Duke Cosimo I de'Medici in the 16th century, the Uffizi Palace houses the most famous collection of paintings in the world. In an exhibition itinerary of over one hundred rooms, two floors of the building host paintings from the 12th to the 18th century, as well as a noteworthy collection of ancient Roman marbles. Today the Uffizi... 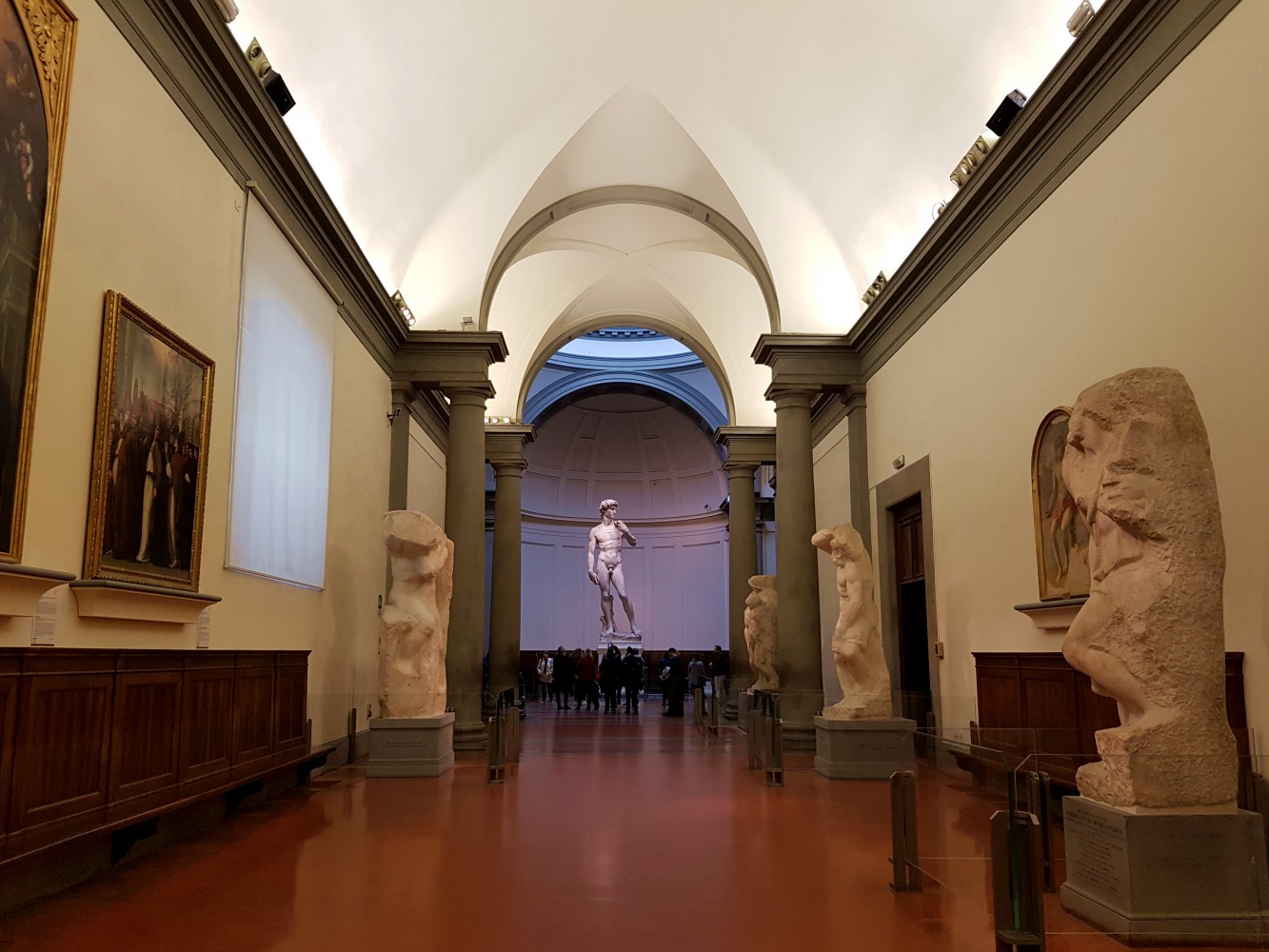 Michelangelo's David Statue is the protagonist of the Accademia Museum . The David statue was sculpted in Florence by a not yet thirty-year-old Michelangelo, it was transferred from Signoria Square to the Accademia Gallery only in 1873. It is incredible to think that this absolute masterpiece of Renaissance sculpture has spent almost four centuries of life in the open air before arriving in the ga... 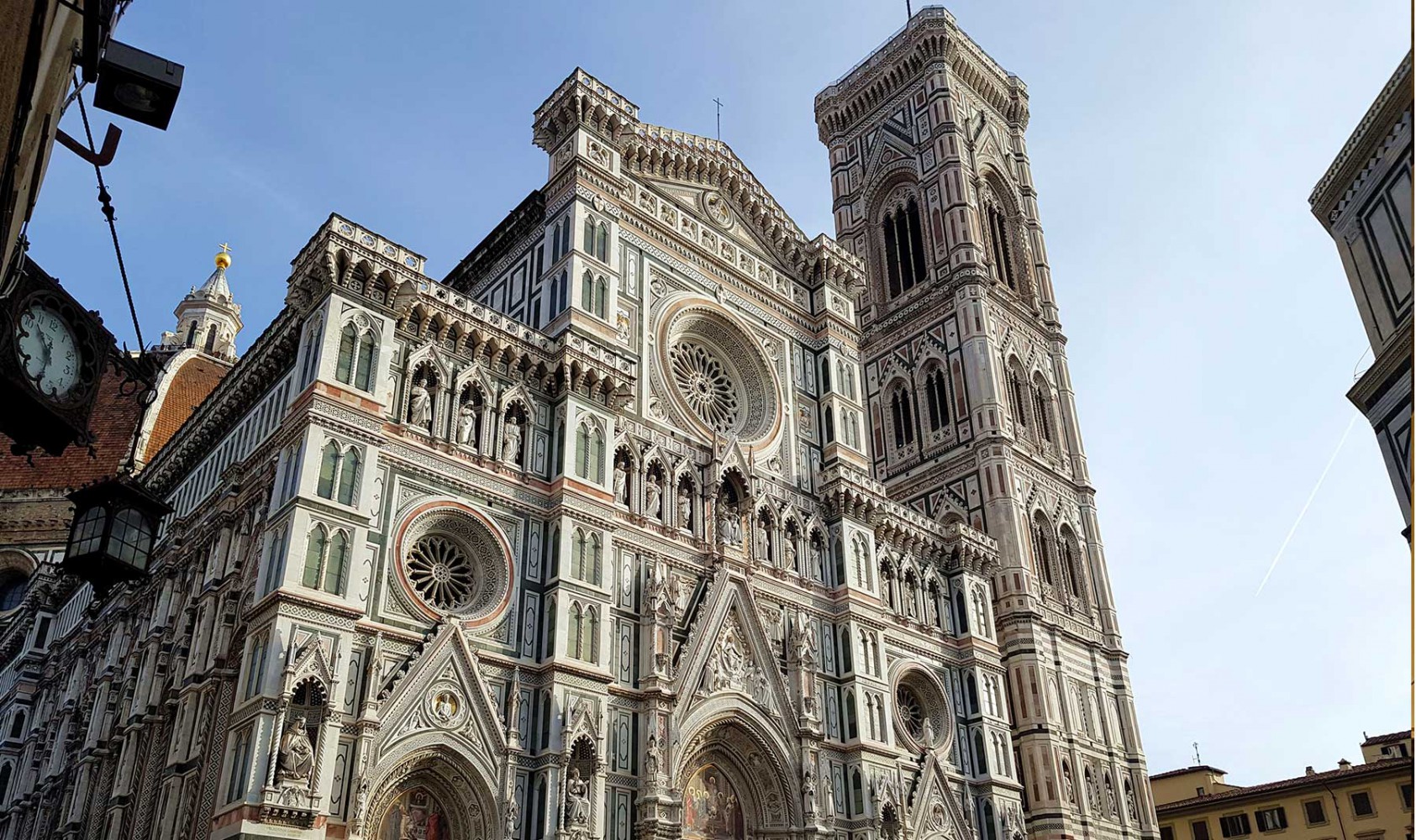 Guided tour of the 'The Complex of the Cathedral' of Florence . located in the northern part of the original historic center, houses a single large museum complex called 'Il Grande Museo del Duomo' (The Great Cathedral Museum). It includes the cathedral of Santa Maria del Fiore with the remains of the former cathedral of Santa Reparata, the Baptistery of San Giovanni, Giotto's Bell Tower, Brunelle...

Do not hesitate to contact me to arrange a personalized visit together according to your particular interests.

Wow! Duccio’s tour is phenomenal. We’ve taken a couple tours in Florence and we learned the most by far in this tour. Duccio is incredibly educated, well spoken, and knowledgeable about the history and architecture of Florence. He’s the best tour guide I’ve ever experienced with his calm ability to recount specific dates, minute details, and countless historical references.

Really informative and well-structured walking tour that hits a lot of high-interest and historical sights within a relatively small (and so, highly walkable) area of the city. We booked this tour as a private group that included my older parents, whose mobility can be a bit limited a times, and Duccio's pacing was perfect: we all learned so much, but without the tour leaving us too tired to keep exploring on our own afterwards!

This was the first tour we did in Florence and was the absolute best way to start our trip! Incredibly interesting and informative. Beautiful arch of the story and history of the city starting with the romans in piazza Della Republica and ending with the war bombing of the bridges on the Arno. Duccio was great!

He was very responsive and I'm glad to have gone on the tour with him. We went for about 2 hours and 15 minutes! I thoroughly enjoyed him as a tour guide, he is extremely knowledgable and is well studied. He is full of facts that goes beyond Florence. If you enjoy history and human geography, I would highly recommend booking with Duccio. Florence is more than historical sites given how rich the culture is and for its institutional background. Thank you again for the great tour!

Duccio was a great guide. It was a pleasure meeting him and showing me around Florence. I appreciated his passion for Florence and all of fun facts about the city that I didn’t know about. His walking tour would be great for first time visitors to Florence as well as people who have been to the city before. 10/10 would recommend and would do another tour with Duccio again. Grazie mille Duccio!

Duccio gave a tour that was a fantastic combination -- history (which was very helpful for context), architecture and art, and some memorable anecdotes. (For example, did you know the reason there's an unfinished stone ring under the Duomo dome? I do now!) Great tour!

He gave us a tour on academia gallery. He was very patinante about what he was telling us and a real story teller. Enjoyed the tour and will definitely use this guide again!

Duccio led our 1/2 day tour of the Accademia and highlights of Florence. We found him very knowledgeable. He never lacked for commentary and never consulted any notes. We will use him again and will recommend him to anyone who asks.

I visited Florence this summer with my extended family and was looking for a competent guide. I was lucky enough to find Duccio. He organized for us a spectacular 3-days visit. He took care of our reservations and did not require advance payment. We hired him for three hours a day but he did not mind to show us around other sites when the time was over. He gave us time to take pictures but, honestly, we were so captured by all that he had to say, that we took very few breaks. When I saw his curriculum on the web I expected a good service but his knowledge exceeded my expectations by far. He is very organized, efficient and friendly. Let him know about your background/knowledge of history and he will adjust his explanations so that you don't miss anything. We could not be happier. I'd say: look no further, you have just found one of the best guides in Florence!

My friend and I arrived at the Uffizi Gallery and were offered a tour which we accepted, and we could not have been more fortunate to have Duccio. Duccio is incredibly well versed and knowledgeable about all aspects of the gallery. His English was great (even if he doesn't think so). I would highly recommend booking with Duccio if you plan to visit the gallery, you will not be disappointed.

We are in Florence and on Thursday had a very informative and educational tour of the Accademia Galley where the famous Statue of David resides. The tour company is called Guide Florence Tour and the guide was Duccio Tiracorrendo who was extremely knowledgable, polite and patient. I'd highly recommend Duccio. Cheers Fons (Australia)

Duccio was a wonderful guide! He was very knowledgeable and pleasantly answered all our questions. I would highly recommend this nice gentleman.

Thanks Duccio for an interesting excursion